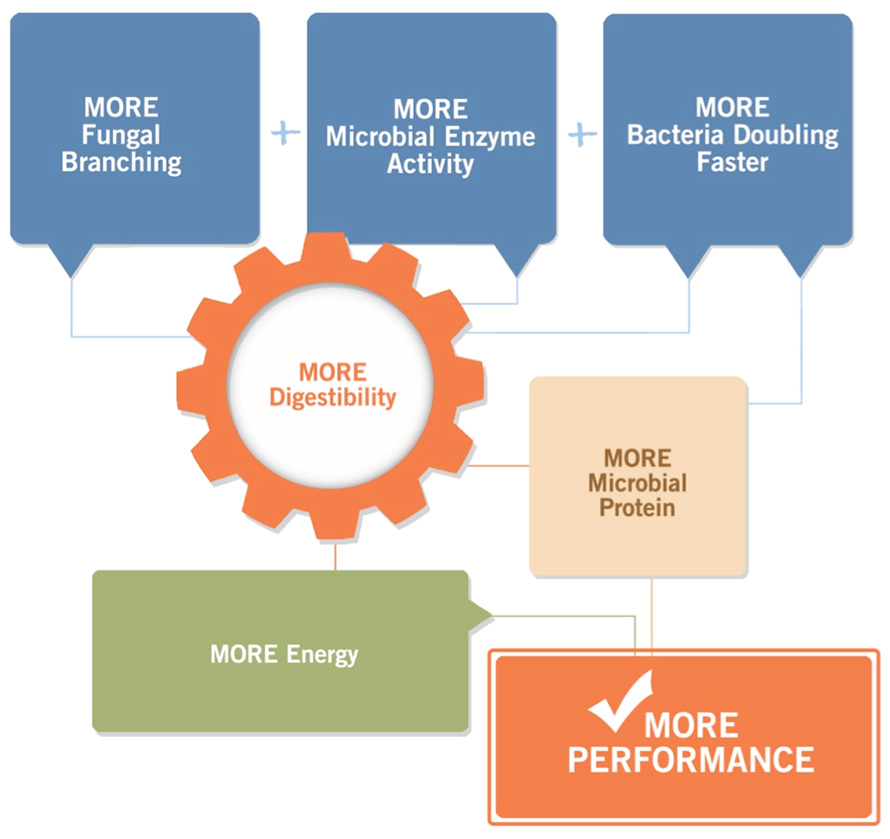 Fungi are one of the microorganisms responsible for digestion in the rumen. Amaferm®‘s stimulation of the rumen fungi is unique. The fungi have a crucial role in fiber digestion, as they are the only organisms capable of breaking the lignon-hemicellulose bonds of forages, so that the bacteria can maximize their role in digestion. Since bacteria digest cellulose and hemicellulose by attaching to them, having the fungi create more surface area for bacterial attachment is critical to maximizing digestion.

Amaferm® accelerated both the rate and extent of fiber digestion through increased growth of the fungus Neocallimastic frontalis EB188 (Chang et al., 1999). This study resulted in significantly more fungal branching and mass as shown below:

Some of the most potent enzymes are secreted at the tips of the fungal branches. In the presence of Amaferm®, there is significantly more branching and more enzyme secretion.

Amaferm® has been shown to accelerate the enzyme production of the rumen fungus Neocallimastix frontalis EB188, resulting in a 37% increase in carboxymethyl cellulase, a 162% increase in β-glucosidase, and a 306% increase in amylase, showing that the effects of Amaferm are not limited to enzymes responsible for fiber digestion, but also starch digestion (Schmidt et al, 2004).

Bacteria are the most prevalent microorganisms involved in rumen digestion. Bacteria can replicate in 10 minutes to 2 hours, depending on the species. Any type of feed processing that increases the surface area available for bacterial attachment increases the number of bacteria digesting feed at any one time.

Amaferm® studies have shown a 79% increase in the total number of ruminal bacteria and a 188% increase in the number of cellulolytic bacteria compared with the control treatment lacking Amaferm® (Frumholtz et al., 1989). Amaferm® increased the growth rate of the fiber digesting bacteria in the rumen, Fibrobacter succinogenes S85 and Ruminococcus albus 7 as well as several strains of the lactate utilizing bacteria Megasphaera elsdenii, Selenomonas ruminantium, and Selenomonas lactilytica (Beharka and Nagaraja, 1998)