Across the US, corn harvest is either underway or completed. Most dairy farms will now have two sources of corn silage to feed: last year’s carryover silage which has fully fermented and steeped plus new-crop corn silage. Some farmers may be faced with feeding immature corn silage which adds yet another feeding challenge. Minimizing variations in herd productivity with changing sources of corn silage requires a good understanding of what happens to the nutritive value of silage with time in the silo.

Corn silage is a dynamic feed – amount and digestibility of nutrients vary with storage time and our ration formulation strategies must accommodate these changes. Much of the research over the past decade has focused on the important changes that occur for starch digestibility or fermentability, but other nutrients change with time as well:

Starch digestibility changes substantially over time. The figure is from a commonly referenced study illustrating the effect of corn silage storage time on starch digestibility (Newbold et al., 2006). Studies vary, but generally you would expect starch fermentability to begin increasing after 3-4 months and some studies would indicate that it will continue to increase through 6 months or so of storage before plateauing. Improvements in starch digestion with time of storage have been observed for both conventional and BMR corn silage hybrids (Der Bedrosian et al., 2010).  Wisconsin researchers have shown that zein proteins encase starch granules and increase with kernel maturation. These zein proteins in the starch-protein matrix of the corn grain are degraded by proteolytic activity over extended ensiling times which increases soluble protein content and the digestibility of the starch.

Based on published research, you would expect starch digestibility to increase by about 3%-units per month; in our lab at Miner Institute we have typically measured between 3 and 4 %-units increase per month with our corn silages.

The common recommendation is to have 3-4 months of silage inventory that can be fed while new-crop corn silage is fermenting and steeping. Not all producers will have sufficient land base or silage storage capacity. For those that can handle the extra silage inventory, it is recommended that they use a plastic covering with low oxygen permeability and use additives to improve aerobic stability. With prolonged storage time, greater precautions need to be taken to maintain anaerobic conditions and good silage quality.

If a producer must feed new corn silage, then recognize that for the first 2-3 months starch digestibility will be lower. Feeding sources of fermentable starch (such as fine ground or high-moisture corn) to compensate for the lower supply of rumen fermentable starch coming from the silage will help mitigate negative effects on performance. Feeding highly digestible NDF from nonforage sources of fiber may also be a good strategy to help in maintaining optimal rumen conditions for efficient microbial growth.

The so-called “slump” in production that occurs when switching from the previous year’s silage to new corn silage is due primarily to the lower fermentability of the starch and the fact that ration formulation has not compensated. The following spring or summer a herd may experience symptoms of rumen acidosis such as fat:protein inversions or laminitis if the ration is not readjusted to reflect the increasing fermentability of the starch.

Recognizing that corn silage is a dynamic feed enables producers to minimize losses in production. The challenge for the nutritionist is to match the ration formulation to the silage being fed. This requires appropriate silage sampling and testing for protein and its solubility, starch and its fermentability, and NDF and its digestibility. 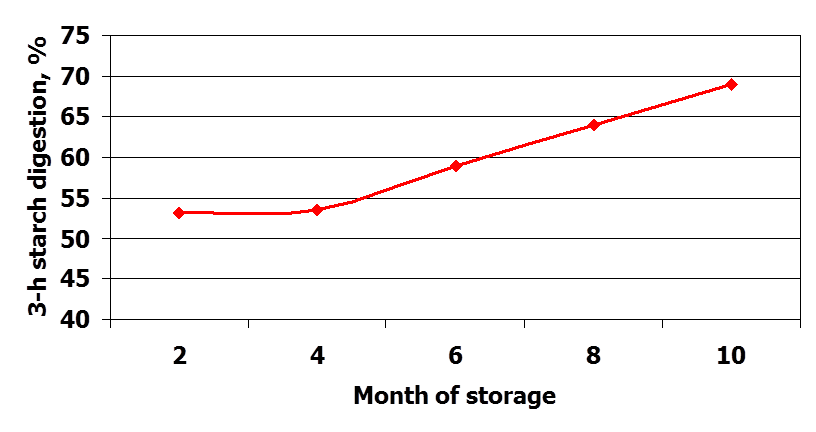 2015 has been a better growing year in most, but certainly not all, regions with more available forage than 2014. Increasing the digestibility of the NDF fraction along with reducing the variation will help them to feed those higher forages levels while maintaining milk production and reducing ration costs.

The NDF fraction is the biggest component of the diet and also the most variable.  Dr. Combs reported in last month’s newsletter that the variation in milk production due to NDF digestibility is double that of starch and could account for up to 5-7 pounds of milk production variation.

AMAFERM is research proven to increase NDF digestion, which will help to reduce the variation in your diets.

Reduced variation converts to performance. AMAFERM’s average milk increase in early lactation is 7%. As an example, for a high producing cow giving 100 pounds of milk at $.17/ cents per pound ($.37/kg), feeding 5 grams of AMAFERM for the first 150 days of lactation, the return to the dairy is $1.09/day or $163.50/cow over the fed period.

This year is the perfect time to reach for Amaferm to improve your forage fiber digestion!