Consumption of NDF by dairy cows is related to rumen fill and intake potential of a forage or ration. Dr. Dave Mertens developed the NDF Intake System to account for both forage quality and cow productivity, and it determines the maximum proportion of forage in the ration that does not limit intake or performance of the cow. Optimal NDF intake occurs at the point of maximum milk production and is ordinarily about 1.25 ± 0.10 % of body weight per day (mean ± standard deviation). It is important to understand that the optimal NDF intake is not the maximum NDF intake, but instead it is the NDF intake that maximizes milk production. Mertens (2009) provides a complete discussion of the NDF Intake System, its assumptions, and applications in ration formulation for dairy cows.

The target of 1.25% of body weight applies to cows in mid-to late lactation. This target NDF intake varies with parity and stage of lactation. For example, first-lactation cows have a smaller ability to process NDF than mature cows. Table 1 was developed by Dave Mertens to provide more specific NDF intake targets for various stages of lactation. 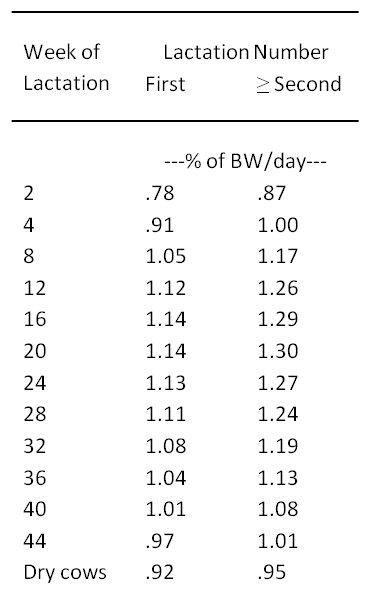 We also know that the NDF amount and digestibility will influence NDF intake for cows at a given stage of lactation. In Table 2, we have some data from a study conducted at Miner Institute in which we compared lower forage diets (49 to 53% of ration DM) to higher forage diets (64 to 67% of ration DM).

The bottom line is that higher forage diets with slower fermenting forage-NDF take longer to process. There are important time budget challenges when cows are overstocked at the feed bunk, especially for younger cows that cannot process forage fiber as effectively as mature cows. Be sure that feed bunk and pen management provide sufficient time for the cows to eat and effectively ruminate the forage in the diet as NDF quality and amount varies.

Based on recent research conducted at Miner Institute and the University of Bologna, here are some potential targets and ranges for NDF intake that are applicable to highly productive dairy cows (55-60 lb/d dry matter intake, and 90-100 lb/d milk production). Note that all NDF values are expressed as amylase-modified, sodium sulfite-treated, and ash-corrected NDF (organic matter basis) abbreviated as aNDFom: