In Digestion Takes Time, I pointed out that digestion kinetics involves lag, rate, and potential extent of digestion, and indicated that potential extent was the most important of the three. Most, if not all, indigestible residue is indigestible NDF. There are minerals in feeds that are not digested, but our focus is on the organic matter in feeds because it provides the energy, protein and major nutrients needed by animals. There is no evidence that neutral detergent soluble organic material is indigestible. Note that I refer to indigestible NDF (iNDF) when I refer to potential extent of digestion, not undigested NDF (uNDF). From both a kinetic and biological perspective, iNDF defines material that can never be digested by anaerobic fermentation in the rumen even at infinite fermentation times. The plateau or asymptote of the digestion curve (see Figure 1, Digestion Takes Time) certainly indicates that digestion is not complete (does not go to 100%).

We typically use measurements of uNDF (what has not been digested after a specific time of in vitro fermentation) to estimate iNDF. Originally, in vitro fermentations of 72 or 96 hours were used to estimate iNDF, and more recently, 200 to 240 hours in vitro or 10 to14 days in situ are being suggested for estimating iNDF. But we need to remember that these uNDF are estimates of iNDF that would have to be measured at infinite times of digestion. The longer the fermentation, the closer uNDF comes to iNDF. But what fermentation time is practical for measuring uNDF that is also sufficient for estimating iNDF for use in current nutritional models and feeding systems?

The biological reasons for indigestibility are related to the limitations of anaerobic fermentation and of physical access of fibrous tissues to ruminal microbes and their enzymes. In anaerobic fermentation, the microbes must obtain the oxygen needed for metabolism from the compound that is fermented. Carbohydrates contain one oxygen molecule for every one carbon and two hydrogen molecules. When one water molecule (H2O) is added during metabolic hydrolysis, the microbes can extract energy when converting carbohydrates to volatile fatty acids, CO2 and CH3. (How many of you thought that the chemical stoichiometry you learned in high school and college would never be useful in understanding animal nutrition?) However, there are compounds in feeds, such as lignin and phenolics that do not have enough oxygen to be fermented anaerobically, so they cannot be digested in the rumen no matter how long the time allowed.

The second factor that limits the extent of fiber digestion in the rumen is the dense molecular structure of polymeric lignin in fiber and plant cell walls. You can envision this structure as concrete (lignin) that covers the reinforcing rods (cellulose) and the ties between the rods (hemicellulose) in a wall. Polymeric lignin prevents ruminal microbes from accessing a portion of fiber for digestion. We have observed that iNDF is typically composed of about 1/3 lignin, 1/3 cellulose, and 1/3 hemicellulose in most forages. Thus, lignin is indigestible, but it also seems to protect a portion of cell wall carbohydrates that are also not available for digestion by anaerobic bacteria in the rumen.

You might ask, “If there is material that is indigestible at infinite fermentation time, why is the earth not covered with it?” The solution to this question is related to oxygen and fungi. In an anaerobic environment there is oxygen available for metabolism of carbon- and hydrogen-dense molecules. In addition, fungi have threadlike filaments called hyphae that penetrate lignified tissues and provide access for degradative enzymes. Thus, once the iNDF is excreted in the feces, it enters an environment that allows eventual degradation. However, this process is relatively slow, occurring in a matter of days to months. There are fungi in the rumen of some animals, which may play a role in fermentation of the most resistant fiber.

Now that you understand the biological concepts related to iNDF, click here to learn about its kinetic implications and importance.

The fungi play a key role in digestion and Amaferm is the only product on the market that has been research proven to stimulate the fungi to an extent that increases digestion. 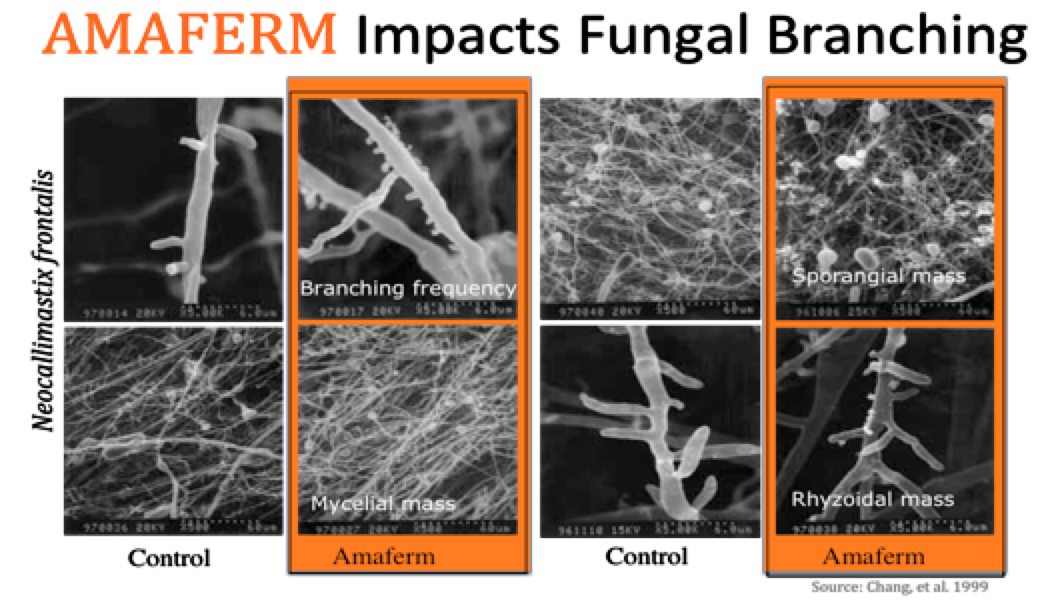 This electron scanning microscope picture of rumen fungus Neocallimastix frontalis with and without Amaferm easily depicts the 3 fold increase in fungal numbers it has been documented to cause. With Amaferm there are more hyphae to crack the fiber and secrete enzymes and therefore, create many more attachment sites for the bacteria to digest the feed.

Recent research points to the fact that the chemical linkages between lignin and hemicellulose may actually be the most important factor in predicting NDFd. These bonds can only be physically or enzymatically broken and the fungi are the major esterase enzyme producers in the rumen.