We are concerned about variation in forage NDF digestibility because of the established relationship between NDF digestibility and cow performance. The figure below summarizes the well-known information from Oba and Allen (1999) that predicts a 0.40 lb/day increase in dry matter intake and a 0.55 lb/day improvement in milk yield for each one percentage-unit increase in forage NDF digestibility. It also shows the lesser known relationship from Minnesota researchers specific to higher corn silage diets (>40% corn silage in ration DM). In this case we expect a 0.26 lb/day increase in intake and a 0.31 lb/day boost in fat-corrected milk. So, variability in NDF digestibility can have a substantial impact on cow response – but is it necessary to be concerned about day-to-day variation?

Conventional wisdom tells us that cows will perform better when fed a consistent ration in a consistent environment – cows don’t particularly like change! Consistent feed, feeding environment, and feeding behavior ought to promote more efficient rumen fermentation throughout the day and more uniform delivery of nutrients to the cow. Interestingly though, at this summer’s ADSA/ASAS meetings in Kansas City an invited paper from Utah State University presented information showing that dietary variability actually stimulated feed intake in some ruminants such as sheep. Perhaps controlled ingredient variability, while maintaining overall ration nutrient profiles, might stimulate feed intake in dairy cows as well? Food for thought – no research to-date – and a topic for another time.

True variation in dietary composition day-to-day does occur due to variations in:

Forages commonly fed to dairy cows can vary substantially day-to-day and month-to-month. For example, Weiss et al. (2012) conducted a survey of farms across the US and found that the smallest range in day-to-day variation within a farm for DM, NDF, and starch in corn silage was about 4 %-units. But, the maximum range for DM, NDF, and starch within the data set was 12, 17, and 27%-units from day-to-day! This magnitude of variation presents a challenge to consistent nutrient delivery to the cow and her rumen.

What explains the observed variability in silage NDF digestibility day-to-day during feed-out?

When we consider adjusting rations based on changing nutrient analyses we assume the variable analytical values are truly representing the forage being fed. But, Weiss et al. (2013) make the important point that excessive ration reformulation based on variable forage sample analysis can be a net negative unless the forage has truly changed. Has the forage really changed in chemical composition or has it only appeared to change? Continual reformulation based on presumed changes in NDF digestibility (or another nutrient fraction) will actually inject greater variation into the cow’s feeding program.

Does the Cow Respond to Diet Variability?

How does the dairy cow respond to transient changes in dietary composition day-to-day? A fundamental point to bear in mind is that her rumen contents do not completely turn over every day and consequently day-to-day variation in forage or diet composition is “buffered.” In fact, we have measured the mean rumen retention time of small, medium, and large forage particles in cows milking over 100 lb/day to be between 36 and 49 hours. So, you can see that the effect of each day’s consumed forage composition will be diluted by previous day’s consumption.

A series of research studies conducted at The Ohio State University over the past few years provides useful information to assess the impact of daily forage variability on cow response. For example, they found that transient reductions in silage dry matter percentage of 10%-units (as may occur during a rain event) did not negatively affect cows as long as adequate feed was provided. Providing adequate feed ensured that cows were able to eat sufficient dry matter despite the fluctuating moisture content of the silage.

The importance of ensuring sufficient feed availability is obvious in the case of variable silage moisture content, but it is also worth remembering for other feed fractions as well. In the face of variable silage quality, we should make certain that bunk management allows all cows in the pen to consume adequate feed. If forage quality is truly variable, and if the feeding environment promotes excessive competition, ration sorting, or bare bunks, then some cows (especially subordinate ones) will experience amplified effects of forage variations as they are forced to eat sorted-through TMR at less than optimal feeding rates and feeding times during the day.

Providing more feed should mitigate the negative effects of forage variability, but it will also drive up feed costs. Try to ensile forages such that the fed-out silage crop is as uniform as possible and that known variation within the silo can be accommodated. Targeting a feed refusal level of 3% may be needed on many farms to avoid restricted feed intake by subordinate cows within a pen – especially if any degree of overstocking exists.

One study conducted by Weiss et al. (2013) assessed the impact of extreme day-to-day variations in forage fiber and protein content. Forage variability was introduced by changing the alfalfa to grass silage ratio day-to-day although total ration forage content did not change. Varying the ratio of legume to grass changed the silage NDF content day-to-day and influenced the NDF digestibility day-to-day with 30-hour NDF digestibility varying by about 5%-units between the alfalfa and the grass. Cows fed the variable diets had greater daily within-cow variation in dry matter intake and milk yield, but their average intake and milk were similar to cows fed a consistent ration day-to-day.

Cows appear unaffected by fairly extreme daily variation in forage composition because this recurring dietary variation is mitigated by short-term mobilization of body reserves (Weiss et al., 2013). For example, on days when cows are fed lower quality forage dry matter intake is reduced but cows can mobilize body fat to maintain milk production. In contrast, on days when cows are fed higher quality forage, they eat more feed and produce more milk. Likewise, we would predict that, if cows are fed lower NDF digestibility forage one day, then intake would drop and cows would mobilize energy reserves. But, if NDF digestibility increased on a subsequent day then cows could consume more feed to compensate. Again, we see that feed offered must be adequate in order for the cow to consume more feed as NDF digestibility increases. If feed availability is limited, then she will be unable to compensate and the potentially negative effects of forage nutrient variability will be exacerbated. The bottom line is that cows appear to have the ability to essentially dampen the response to repeated daily bouts of variable forage NDF and NDF digestibility and associated transient reductions of energy intake.

Over time though, highly variable forages and diets (especially if feed availability is limited) could reduce body condition as the cow is repeatedly called upon to mobilize reserves in an effort to compensate for variable nutrient intake. Additionally, the negative effects of forage and diet variability are likely cumulative and so performance can be more severely impacted as time goes by. The magnitude of any cumulative effects over lactation remains unknown at this point because no research trial has investigated it.

Improper sampling technique biases the forage sample. The essential challenge in sampling forages is that they are very heterogeneous both physically and chemically. Too often, the sampling process on-farm does not allow us to differentiate between sampling variation and real day-to-day variation. We can expect to see true daily variation in silage DM, CP, NDF, and NDF digestibility due to multiple fields and (or) cuttings being present within a sampling period (i.e. one day’s worth of silage), to changes in the grass to legume ratio throughout a field, or to differences between corn or cereal grain hybrids ensiled in the same bunker silo. The forage sampling procedure must minimize error associated with collecting the sample so that we can accurately measure the variation in forage quality. Poor sampling technique can enrich or exclude specific types of particles. Common errors include pulling a handful from the silage face that leaves longer particles within the silage mass, having your palm down which allows small particles to drop from the sample, and not sampling vertically from a pile of forage since small particles migrate downward.

A thorough explanation of how to optimally sample forages stored as silage or dry hay is beyond the scope of this article, but the best recent publication is by Weiss et al. (2014). A subsequent article will delve more deeply into sampling forages.

Corn Silage is a Challenge to Sample

Corn silage can be the most difficult forage to sample properly and new approaches to silage harvest such as shredlage may contribute to even greater potential for biased sampling if not done properly. Corn silage is comprised of particles of cob, grain, leaves, husk, and stalks. The various plant components are located in forage particles of differing size, shape, and density. We need to minimize particle segregation during sampling to avoid biasing the sample. A good example of the expected variation in corn silage NDF and NDF digestibility based on variation in plant composition is shown in the table below from research conducted at Miner Institute in 2001. Corn hybrids that varied in the relative proportion of stover to grain, as well as NDF digestibility, could result in true variability within a day if ensiled together in a bunker silo. 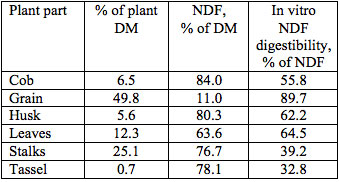 If the corn silage sample contained greater or lesser amount of stalk than the true silage, you would end up with the sample information shown in the next table (adapted from Weiss et al., 2014). In this example, the silage samples would have a spread of 8%-units for NDF, about 3.5%-units for NDF digestibility, and about 7%-units for starch. Actual variation day-to-day in silage NDF or NDF digestibility would be exaggerated by this sort of biased sampling and could result in poor ration reformulation decisions. 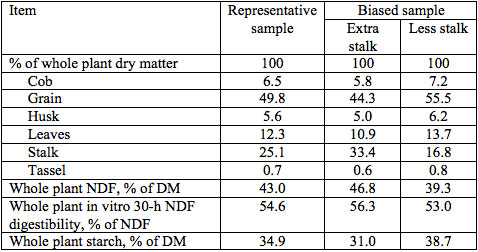 True day-to-day variation in forage NDF and NDF digestibility can exist. But, we must be able to distinguish between this real variability and variation due to sampling technique or differences among labs. Although we don’t yet know the long-term ramifications of silage (and therefore diet) variability on dairy cow physiology and performance, it appears that at least in the short term cows are able to adjust to fairly sizable variations in NDF and NDF digestibility day-to-day. Research tells us that excessive ration reformulation in an attempt to compensate for daily variations in NDF or NDF digestibility can actually cause more variability in cow intake and milk yield responses.

Oba, M, and M. S. Allen. 1999. Evaluation of the importance of the digestibility of neutral detergent fiber from forage: Effects on dry matter intake and milk yield of dairy cows. J. Dairy Sci. 82:589-596.

Dr. Grant points out that day-to-day variation in Forage NDF and NDFd can exist, but we shouldn’t necessarily chase it with ration reformulation.

As highlighted in the paper, research shows that increasing NDF digestibility will increase dry matter intake and milk production.

Amaferm improves digestion of forage NDF on average by 17%, regardless of the variability of forage quality or forage type within each data set.