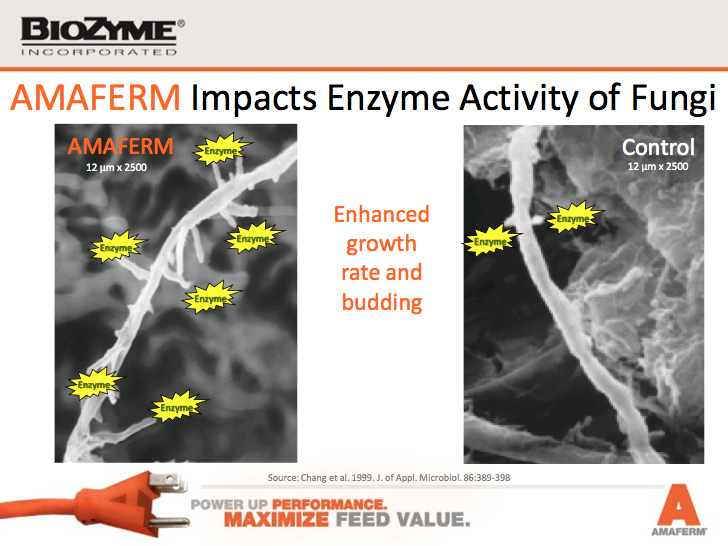 Corn harvest is mostly completed although a significant number of farms in the Northeast and upper Midwest are facing later harvest of possibly immature or frost-damaged corn silage. Corn development has been delayed and so the risk of frost damage and the need to harvest immature corn silage has increased. Depending on the planting date and type of silo, projected harvest dates run well into October for some parts of the U.S. and Canada.

Immature corn silage will typically be higher in crude protein, NDF, and sugar content, but lower in starch than normal corn silage. Because dry matter content is often lower, the risk of poor fermentation is higher and the resulting silage may cause reduced dry matter intake. The energy value of immature corn silage ranges from 80 to 95% of normal corn silage. The reduction in energy content of slightly immature corn is not as great as you might expect because, although the NDF content of the whole plant is higher, the stalk fiber is less lignified and more digestible. Since many factors influence the nutrient composition of immature or frosted corn silage, an actual analysis of your specific corn silage is needed. Wet chemistry analysis may be better than NIR because calibrations for normal corn silage may not fit well with immature silages. You should discuss this issue with the forage testing lab that you use to determine whether their NIR analysis accurately predicts the nutrient profile of immature or frost damaged corn silage. In order to obtain the most accurate estimate of the silage’s true energy and feeding value, be sure to analyze the silage for CP, NDF and NDF digestibility, starch and starch digestibility in addition to the usual values reported on a typical forage analysis. Knowing the total fermentable carbohydrate content of your corn silage is critical for ration formulation.

Regardless of whether the 2014 crop was harvested at ideal maturity or less than ideal, most dairy farms will have two sources of corn silage to feed: last year’s carryover silage which has fully fermented and steeped plus new crop corn silage. Feeding immature and/or frost damaged new-crop corn silage adds yet another silage feeding challenge. Minimizing variations in herd productivity with changing sources of corn silage requires a good understanding of what happens to the nutritive value of silage with time in the silo. Corn silage is a dynamic feed – amount and digestibility of nutrients vary with storage time and our ration formulation strategies must accommodate these changes: STARCH

Studies vary, but generally you would expect starch fermentability to begin increasing after 3 to 4 months and some studies would indicate that it will continue to increase through 6 months or so of storage before plateauing. Based on published research, you would expect starch digestibility to increase by about 3%-units per month; in our lab at Miner Institute we have typically measured between 3 and 4%-units increase per month.

More soluble, degradable protein should be fed with new corn silage that contains less soluble protein, with periodic re-formulation as soluble protein in the silage increases over time. Wisconsin researchers have shown that zein proteins encase starch granules and increase with kernel maturation. These zein proteins in the starch-protein matrix of the corn grain are degraded by proteolytic activity over extended ensiling times which increases soluble protein content and the digestibility of the starch. Positive relationships have been observed between starch digestibility and ammonia-N (R2=0.67) and soluble CP (R2=0.55). In fact, Wisconsin research indicates that ammonia-N and soluble CP are both good indicators of starch digestibility in corn silage. Delaware researchers (Kleinschmit et al., 2006) noted a steady increase in NH3-N in corn silage through 361 days of ensiling that never reached a plateau.

Additionally, sugar content will be higher in freshly ensiled forages, especially within the first week, but amounts decline quickly with silage fermentation. Lipolysis occurs in the silage with time, but the nutritional impact on the cow has not been determined. Finally, there is little change in NDF digestibility with time of ensiling.

The common recommendation is to have 3 to 4 months of silage inventory that can be fed while new-crop corn silage is fermenting and steeping. Not all producers will have sufficient land base or silage storage capacity. For those that can handle the extra silage inventory, it is recommended that they use a plastic covering with low oxygen permeability and use additives to improve aerobic stability. With prolonged storage time, greater precautions need to be taken to maintain anaerobic conditions and good silage quality. If a producer must feed new corn silage, then recognize that for the first 2-3 months starch digestibility will be lower. Feeding sources of fermentable starch (such as fine ground or high-moisture corn) to compensate for the lower supply of rumen fermentable starch coming from the silage will help mitigate negative effects on performance. Carefully monitoring starch digestibility in the silage monthly (or at least estimating its change using the average of 3-4% units increase per month) will safeguard against over or underfeeding rumen fermentable starch. The so-called “slump” in production that occurs when switching from the previous year’s silage to new corn silage is due primarily to the lower fermentability of the starch and the fact that ration formulation has not compensated. The following spring or summer a herd may experience symptoms of rumen acidosis such as fat:protein inversions or laminitis if the ration is not readjusted to reflect the increasing fermentability of the starch in the corn silage. Recognizing that corn silage is a dynamic feed enables producers to minimize losses in production. The challenge for the nutritionist is to match the ration formulation to the silage being fed. This requires appropriate silage sampling and testing for protein and its solubility, starch and its fermentability, and NDF and its digestibility. References: Ferraretto, L. F., R. D. Shaver, S. Massie, R. Singo, D. M. Taysom, and J. P. Brouillette. 2014. Effect of ensiling time on fermentation profile and starch digestibility in whole plant corn silage from two different hybrid types. J. Dairy Sci. 97:540 (Abstr.). Hoffman, P. C., N. M. Esser, R. D. Shaver, W. K. Coblentz, M. P. Scott, A. L. Bodnar, R. J. Schmidt, and R. C. Charley. 2011. Influence of ensiling time and inoculation on alteration of the starch-protein matrix in high-moisture corn. J. Dairy Sci. 94:2465-2474. Kleinschmit, D. H., and L. Kung, Jr. 2006. The effects of Lactobacillus buchneri 40788 and Pediococcus pentosaceus R1094 on the fermentation of corn silage. J. Dairy Sci. 89:3999-4004. AMAFERM APPLICATION

Dr. Grant advises that one of the main reasons for the “slump” with new corn silage is related to the indigestibility of the starch component of corn silage. Starch provides a major part of the energy in corn silage that the cow needs to produce milk.

The main problem is limited access of the starch-digesting bacteria TO the starch granule. A kernel of corn has two levels of defense:

Rumen fungi have a unique function in the digestion of the corn kernel. The fungi have been shown to:

In the presence of Amaferm, the stimulated fungi have more hyphae to break open the kernel for increased access of the proteolytic bacteria to degrade the zein protein AND make the starch granule more available.

Amaferm is the only product on the market that is research proven to stimulate the rumen anaerobic fungi to increase digestibility of starch and forage fiber.