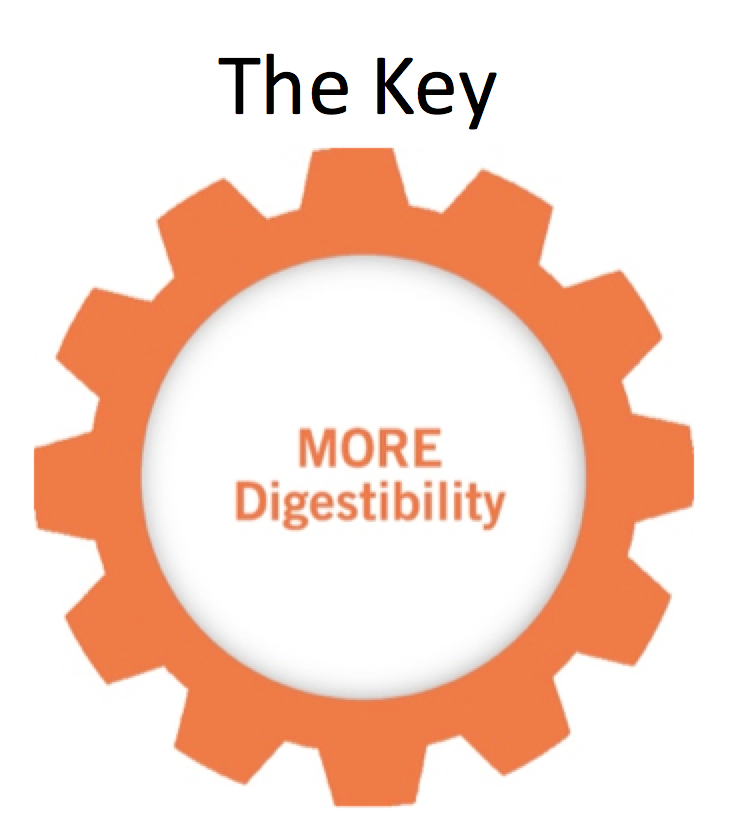 To read Part I Indigestible Residue – What it is? Why does it occur? click here.

After we have established the biological rationale for indigestible NDF (iNDF), we are in a position to discuss its implications and impact on digestion kinetics. In 1969, USDA-ARS scientist Dale Waldo of Beltsville, Md., was the first to correctly postulate at a conference that the key to describing and understanding digestion of fiber was related to indigestibility. He sited some long-term in vitro data and concluded that if the indigestible fiber was subtracted from total fiber, the remaining potentially digestible fiber might follow first-order reaction kinetics. This was the breakthrough that led to the mathematical description of the dynamics of fiber digestion.

It has been stated that long-term in vitro measurements are irrelevant because feeds do not stay in the rumen of dairy cows longer than about 48 hours. First, it can be demonstrated with the correct passage model that significant fiber does stay in the rumen for longer than 48 hours. In fact, the rumen is designed to selectively retain fiber so that it has adequate time for digestion. Second, this comment misses the point that the reason for measuring digestion for more than 48 hours is to determine the potential extent of digestion and assure that kinetic parameters are conceptually correct and accurately determined.

The central tenet of kinetic analysis is that each pool (sometimes called compartments) must have homogeneous kinetic attributes (but not necessarily homogeneous physical or chemical characteristics). This means that every particle or molecule in the pool must react at the same rate. If rates differ, we must have a pool for each rate (multiple pools) to describe the system. My first spreadsheet exercise will focus on the key role of defining iNDF on the kinetic description of the fermentative digestion of fiber.

To demonstrate these kinetic principles and help you understand the mathematics of calculating kinetic parameters, we will analyze a set of digestion data. The measurements of digestibility for a grass and a legume were collected over numerous replications so that the observed data is very smooth. Please realize that actual data collected, even over 4 to 6 replicates, would have significant scatter about each data point, which would cloud the issues that I will be addressing. Note that we typically plot the accumulation of material “digested”, though that is a rather odd way of viewing the process: plotting what disappears. We actually measure the residue that does not disappear – the mirror image of digestion. Describing the residue remaining at any time of fermentation is not only more correct analytically, but is also crucial for the mathematical description of digestion kinetics.

One final issue before we delve into the mathematics of digestion kinetics – the vast majority of dynamic models are based on first-order reactions, which means that the absolute rate of reaction is related to the amount of substrate raised to the power of 1. Don’t be concerned about this distinction just yet because we will discuss it more thoroughly when we talk about fractional rates of digestion. For now, the important concept is that first-order processes are exponential processes, which can be transformed into semi-logarithmic relationships with time. Natural logarithms make these relationships linear, which makes them easier for us to visualize and simplifies the mathematics of solving for fractional rates. In today’s spreadsheets, natural logarithms are quickly and easily calculated by built-in functions.

Please click here to access the spreadsheet, “ForageFacts4.xls” which shows the time of fermentation in Columns A and C, the percentage of NDF residue remaining in Column B, and the natural logarithm of (% NDF res remaining) in column D. Let’s assume that you only measured data for the first 48 hours of fermentation, and you assumed that there was no indigestible NDF. The semi-log graphs of this data are shown for the grass and legume.

Right-click on any data point in each graph and left-click on [Add Trendline] in the menu box. Make sure the [Linear] Trend/Regression Type is highlighted and then left-click on [Options] in the list on the left side. Check the boxes for both “Display equation on chart” and “Display R-squared value on chart” at the bottom of the dialog box and then left-click on [OK]. Congratulations – you have just calculated your first fractional rates of digestion (kd). The -.0276 coefficient for x in grass and -.0169 coefficient for legume are the kd for each. They are incorrect because our assumption of no iNDF is incorrect, but you now have the tools to calculate fractional rates.

In Forage Facts 5, we will use this spreadsheet to demonstrate the intricacies of how estimates of iNDF affect the other kinetic parameters.

This issue post allows you to view a hypothetical digestion chart.  I think you can see that anything we do to drive the reaction to the left will increase the rate and extent of digestion.

Amaferm is the most researched rumen modifier on the market today when it comes to fiber digestion.  Including Amaferm in the diet will increase digestion (move the line to the left).  Amaferm will help get more of the potentially digestible—digested!  And that means more production, on average you can expect a 7% increase in milk production in early lactation.